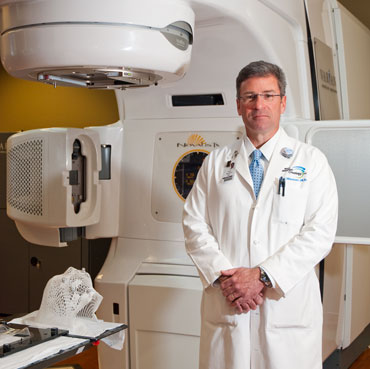 Dr. Paul Monsour was born and raised in New Orleans. He graduated from LSU medical school in 1987, and completed a residency in Radiation Oncology in 1991 at LDS Hospital in Salt Lake City. He is board certified in Radiation Oncology. He has numerous publications and was awarded the Young Oncologist essay award by the American Radium Society in 1991 for his work in melanoma.

He has been in practice in the metro area since 1991, and is a certified MD Anderson Physician affiliate. Dr. Monsour is active in the American Cancer Society and was honored with the Spirit Award in 2008. He is the medical director of Radiation Oncology at East Jefferson General Hospital and serves on multiple committees including chairman of the Oncology Committee.

Dr. Monsour has expertise in Brachytherapy; he has a strong interest in Prostate Brachytherapy and is one of the most experienced physicians in the area using this technique. He also has expertise in state-of-the-art external beam treatments such as IMRT, IGRT and Stereotactic Radiosurgery.

Dr. Monsour has a strong love for the New Orleans area. After Hurricane Katrina, he made sure his and other cancer patients were well cared for by reopening the Radiation center at EJGH as soon as possible and doing whatever it took to get the job done.

He enjoys fishing, golfing and running. He also loves spending time in the New Orleans area enjoying the festivals, local cuisine and, of course, the people. Dr. Monsour is also a proud member of the WHO DAT Nation!